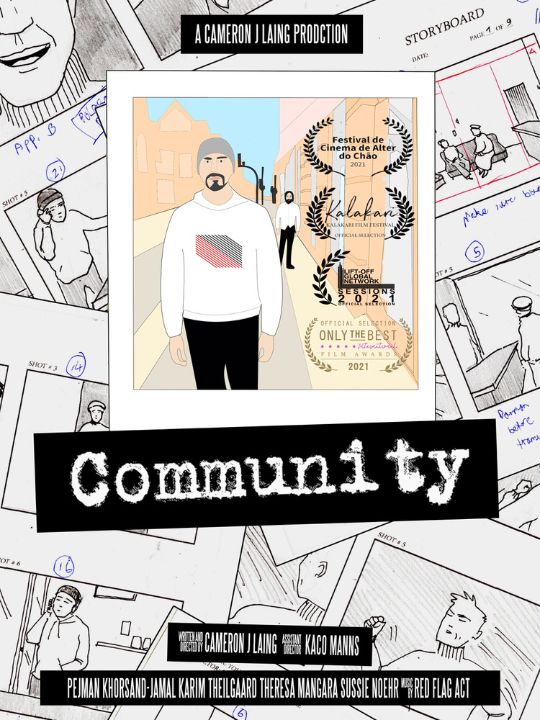 In the casting process a multi-ethnic and diverse age range was sought. There was a coming together of young and old in the opening scene so a character of a more senior age had to be included. For “Lena” and “Lady” the intention was to show the zest for life that another person can hold and to be open to new things, to respect younger/older generations with an open-mindedness and to not feel that age and experience is a given for wisdom and knowledge. As we become more globalised and integrated with those of different ethnic backgrounds and race through technology as well as travel, “Lena” had to be non-white. The openness of “Lady” was to show that age is not a barrier to being able to change one’s perceptions or viewpoint; irrespective of how one might have been brought up or the attitudes of others around.

The coins are references to the neatness and safety of what people know and conformity through linearity; even and odd. Striking out and taking risks are a gamble and to not match up in a “square peg in a round hole way”, showcases a suspicion towards the unknown.

“Lady” - The more mature character in the short was the vehicle for positivity.
Her attitudes to the various things that she experienced was intended
to show a more considered, calm response at all times. She was someone who was non-judgemental in her outlook, showing how it had served her well to this point in her life.

“Eddy” - The barista was written to show the energy that we give out is
reflected in how it is received as we react to situations. Here, it was
pushed to a more extreme level. The dialog that is seen in the two
different sections between Lady and Bud show contrasting emotions
using subtitles to give a more “open” interpretation to the viewer with
what is going on with the scene rather than the direct way straight dialog
leaves you in little doubt as to how the situation actually is. Eddy is
inherently good, but as humans we are susceptible and guided by at
times, external influences. This could be lack of sleep, stress or bad
news..

“Bud” - The tone set from the moment that he arrives in the coffeeshop is one
of an implied tension and an immediate change of atmosphere. His
body language is one that incites an element of weariness in the
viewer or those around whom he does not know. This sets
off a series of awkward exchanges with Eddy that become more
amplified with each interaction or development with Bud, escalating to
a point (until the penultimate scene), in how Eddy views the
scene, rather than any significant change in dynamic.

On the surface, the idea was to was to approach how he is and how he is
responded to in a more realistic and less Hollywood way.

The ending aside, it was an honest and genuine intention to show the way in which he enters the shop and the way it might appear as he is ordering. It is ultimately the viewer who might perceive him as barging into the shop. We are not always at our best all the time and this was done to question this – when we are distracted, we miss things. Did he even see Lady? Why should we assume that he did? Although it doesn’t become clear until after he has sat down, he has just received some worrying news. When this happens and panic sets in, how we come across might not be something we are necessarily aware of through our distraction. After the call ends, his acceptance of the situation and the bigger picture allows him to calm down and start to process the information in a more logical fashion.

Music
The score for the film was done in a way to guide the viewers emotions as well as to give it a more contemporary feel. The way the music changes is used to give a sense of the atmosphere of the location and it is directly related to how Eddy senses it.
When the film starts to build to its climax, through the music and camera work, the heightening of the drama is emphasised through these two elements. With the music taking a darker turn again, it is purposefully made with the viewers implied feelings of the situation. This however, does not necessarily mean that what is being experienced is actually real. As the viewer are you taking the situation at face value just because it is being presented in a certain way? Are you because of this, being judgemental yourself?

Visuals
The visual aesthetic of the film was inspired by 90’s indie cinema using primarily a 16mm sensor as well as a ratio of 1:1.33; drawing the viewer in to a more intense and at times slightly too close for comfort focal point. These elements were used to give a more “gritty” and raw feeling. The relative lo-fi treatment was decided to make it more human to emphasise the realness as opposed to the superficial technological gleam of modern-day cinema.